The Trade That Made No Sense 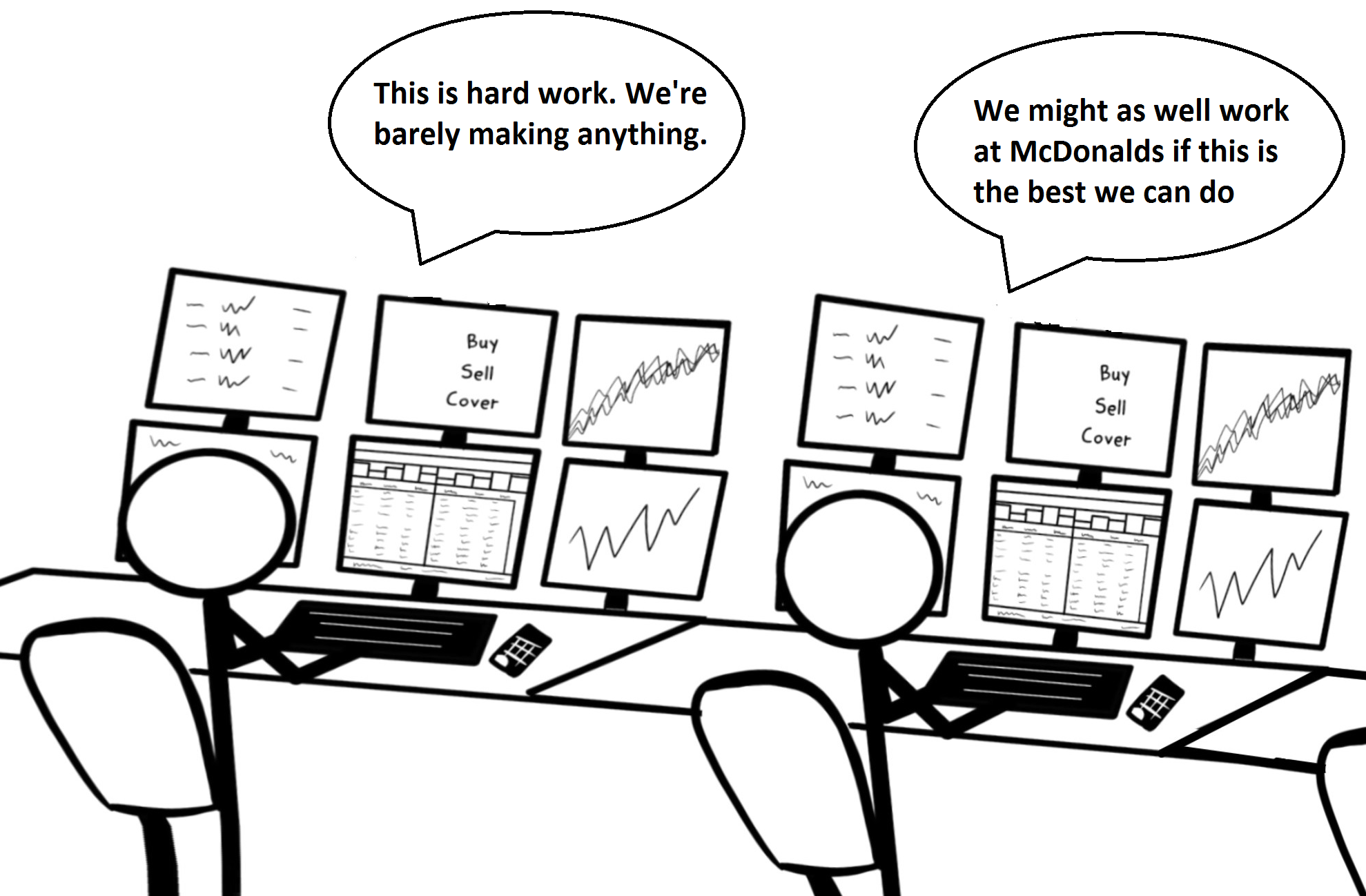 We were were in agreement that we had to find a better way.
Clockwork and I started our trading careers as  professional minimum wage traders. We meticulously manufactured small profits–all amounting to a low payout that, after being chewed up by commissions, profit split, platform fees, and the occasional compliance fine, would fail to sustain even a mediocre life quality in high-priced NYC.
Every day, we would trade with the same bullshit trading piker mindset.
We would look for tight consolidation patterns, squint at the level II for a large order that could be our exit to reduce slippage, buy the first tick-up with a tight stop, and hurriedly try to sell it for 10 cents.
Yeah 10 cents. Why so little?
Well, every time a winning trade came back to our entry–which was literally every time it felt like–we would experience immense regret that we didn’t sell it. Because we “knew” it would happen.
“Welp, looks like they’re gonna run the stops again.” 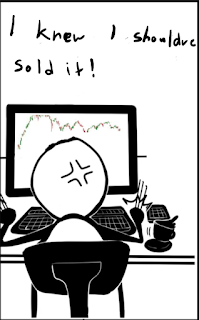 We had trapped ourselves psychologically. Taking mediocre ideas and trying to take mediocre profits before the trade proved its true colors–that it was a mediocre trade with little chance to form the sustained, powerful trend that’s worthy of holding. Our only saving virtue, one that would ensure profitability, was being too cynical to believe in our own trades–because being patient and riding a winning trade was a sucker’s game. Something they wrote about in trading psychology books from 20 years ago before the HFT’s made the market too annoying to trade.
I joked about going to law school. He joked about getting an MBA. Enough was enough…  this was the final straw. If you don’t make real money in a risk-taker’s job, you might as well just quit and get a real job. And if you’re about to quit, you might as well empty all the bullets and see what happens (especially on someone else’s dime).
“Let’s trade bigger and if we blow up, we blow up. Who cares at this point?”

We had a clock in our heads at this point–now or never to make this trading pipe dream a reality.
But we agreed the solution wouldn’t be to increase size with our current piker bullshit trading strategies.
We needed to find scale-able strategies where we could hold positions with both size and conviction.
The type of strategy that would make us real money, the type of money that attracted us to trading in the first place.
First, we needed better…

Slow Trot was one of the best traders from Crazy Capital Group. He had been trading for 14 years. He wore shorts, flip-flops, and an old raggedy t-shirt. He spoke with a slight Texan ‘twang in his voice. He took his seat at the bar and ordered all of us a drink. We wanted to pick his brain.
Slow Trot  told us about all the weird shit that guys at Branch B would do to make money. It was a whole different world outside of the repackaged vanilla technical strategies that over-saturated trading education circles.
Secret sauce trading strategies that included:
Slow Trot told us about the day the entire firm bought stocks during the flash crash. Their attitude stuck with me:
“It was someone else’s money.”

I recorded their best and biggest trades on a daily basis, to see if there was something I could learn from the pro’s.

For one week, I noticed that every day Slow Trot and his buddies would be shorting AEPI Industries a few minutes before the close and covering afterhours for a profit. 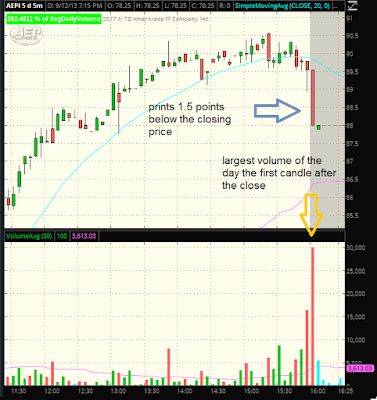 AEPI: Chemical company. Thinly traded — at most 200-300k in volume on a “highly traded” day. Never heard of them in either real life or the circles of FinTweet. Yet the most highly profitable ticker for the firm for the past month.
I couldn’t understand what the edge was on the trade. Who is giving this money away?! This wasn’t a day trade. Position trade. Technical trade. Fundamental trade. Trend trade. Mean reversion trade. Scalp. None of those labels could aptly describe what was going on here. AEPI was a mystery box that I couldn’t wrack my head around. For starters, it made absolutely zero sense how all of these traders could close their positions at reasonable prices during the afterhours market (when there is “supposed” to be far less liquidity and very wide bid/ask  spreads), let alone why the stock would move at all afterhours with no news.
The AEPI trade was more a weird phenomenon or glitch that kept repeating, over and over and over again.

The stock would trade close to half of its daily volume in one 5 minute bar from 4:00 to 4:05 and always trade in the same direction. DOWN. It never upticked, not even once.

And traders were making money hand over fist betting that it would keep repeating itself. They made their entire week/month on one pain-free trade that lasted a few minutes while pikers like myself would grind all day to pay the bills.

There was no explanation from anyone as to why it would work.

To exacerbate my FOMO (fear of missing out), new traders on the desk started joining the trade, with no better an understanding on what was going, and would reap the rewards.

I had a voice of reason telling me “don’t take risk on something you don’t understand”. Then I told that voice to cram it. I thought about some of the strategies that the top guys used. Did they truly understand their edge at every micro detail level? Not really. They just did what worked. I had to turn off my brain and leave the skepticism at home. This was free money and I just didn’t know why yet.

Do I even have to tell you what we did next? There was only one logical course of action. 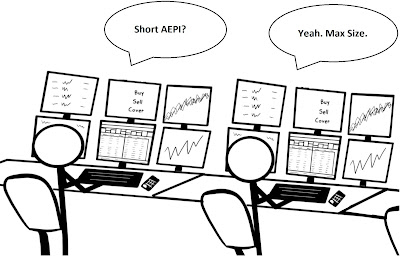 We saw Slow Trot get into the trade a few minutes before the close. We jammed into it as well.

Then we waited, in great anticipation. 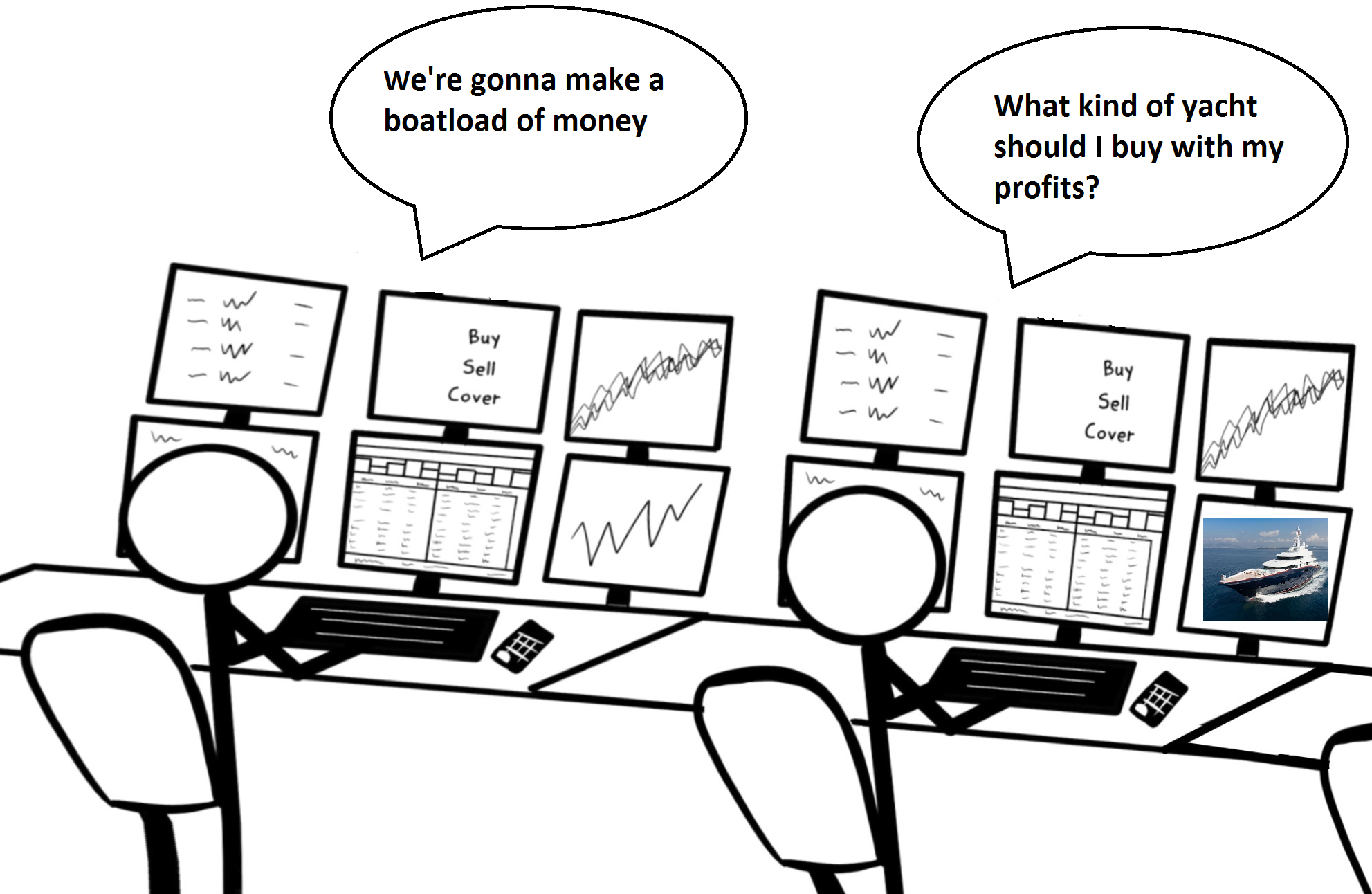 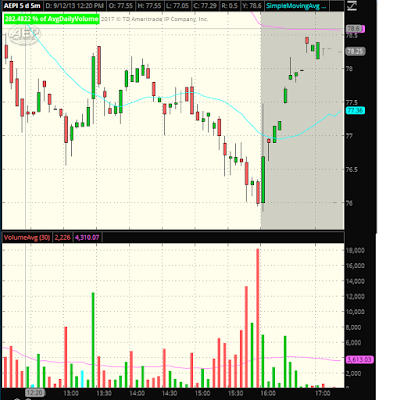 Our positions were immediately out of the money. 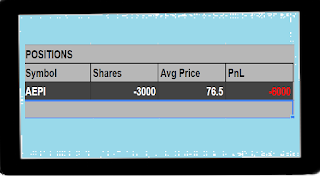 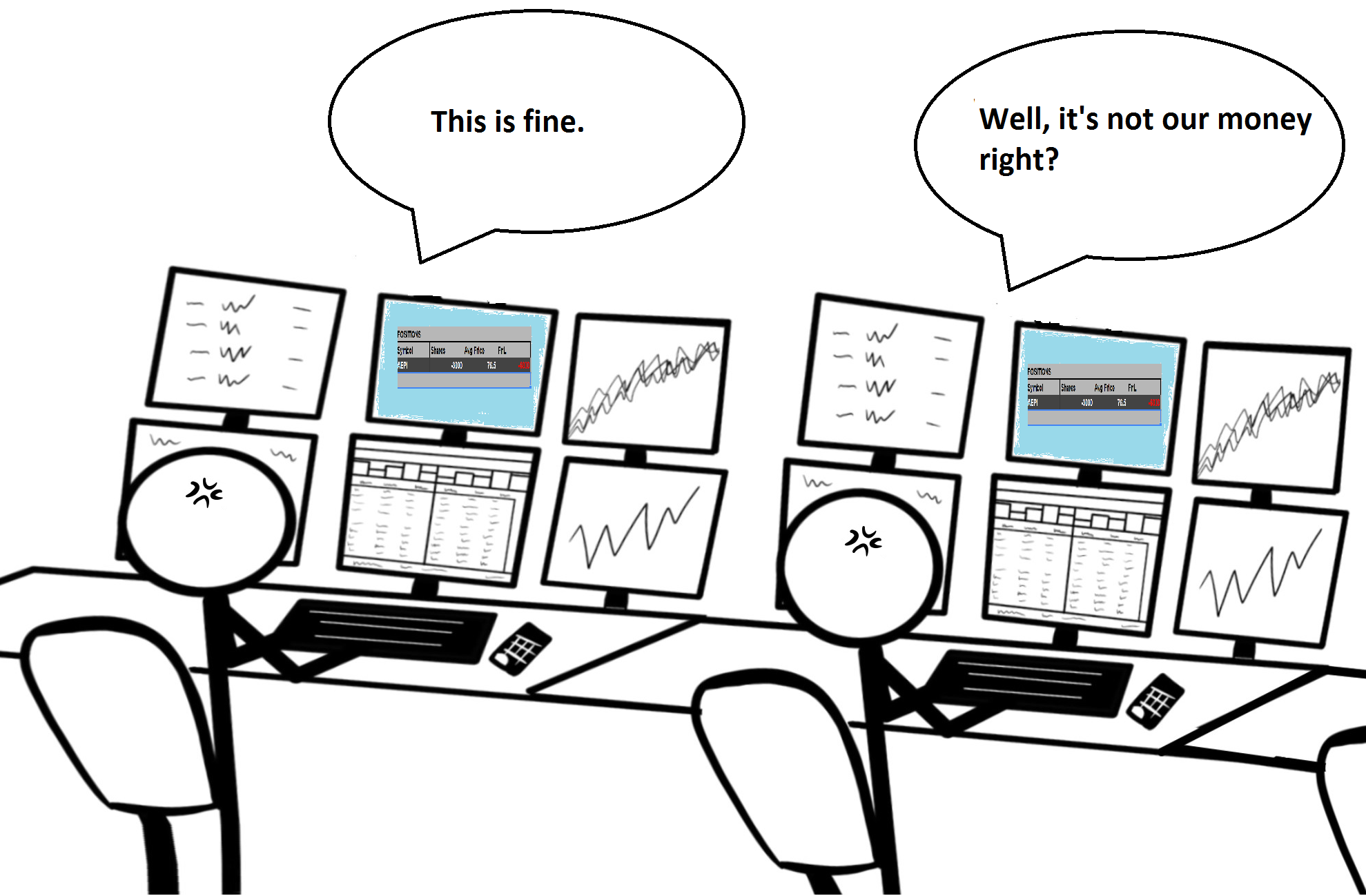 Faced with paying up a big one point spread to take a loss, we chose to keep holding.

Then we saw the “pro traders” add to their positions so again, we just followed along and did what they did.

This was definitely going to end well.

The Day After That

The next day we hoped it would just stop and let us minimize our damage. Okay, the glitch stopped working but that doesn’t mean there’s reason for the stock to move up right?
At the open, our hopes were dashed. AEPI refused to slow down.
Our max-loss limits were triggered on the open and the firm liquidated our positions.
It was my worst loss of the year. It wiped out the last 3 months of hard earned piker trading profits. The firm as a whole took quite a beating.
They say the best trades have 3 phases:
Innovators.
Imitators.
…and Idiots.

And once the idiots hop on the bandwagon, the trade gets over-crowded and stops working.

Even though I don’t know why the trade ever started working in the first place, I at least know why it stopped working.

To this day, I still have no idea what was going on in AEPI. I have many questions.
1) How did someone find out about it?
2) Why did this trade have an edge?
3) Why did it stop working?
4) Was this a case of a trader knowing something but not wanting to spell it out for legality reasons?
5) How was everyone else so willing to hop onto a trade that seemingly had no clear logical explanation for why it worked?
There’s a lesson here about not getting into trades you don’t understand, but I didn’t start this blog to impart wise lessons. I’m just an idiot.