The Firm Next Door

There was another prop firm sharing the building floor with us. Let’s call them Lemmings Capital.
Lemmings Capital was a small outfit run by a rotund bear-bodied Russian, Ivan, and Bob, a balding, bespectacled man who always sported an worn-out adjustable cap. Supposedly, they were both “traders back in the day” i.e. the SOES bandits era. I would pass by both of them in the common areas frequently, but never make eye contact nor acknowledge them in any way. Maybe it was because the memory of ease-dropping on a conversation my head trader had about those two where he remarked,

“I don’t know how those two sleep at night.”
It was always different faces shuffling into Lemmings Capital around 8am in the morning. Mostly young recent college graduates, many of whom English was not their first language. Some majored in the humanities. Others did social sciences or communications. One of them pursued a theater degree. Not sure if anyone with an actual finance background ever traded there. You wouldn’t see the same face for longer than a month, but you’d see the same familiar expression. Fresh out of school. Deer-in-the-headlights. Clueless.
One slow summer trading day, many traders were out in the kitchen to watch Euro 2012 on ESPN. I made small talk with one of their traders, Billy, asking him about the strategies that his firm used. What was the training process like? What setups did they look for? What did their mentors instruct them to call out on the desk?
“Well, we look for steppers.”
“Oh, what’s a stepper?” I asked with eyebrows in-quizzically furrowed, trying to mask the smirk that would give away that I already knew the answer.
It was an “advanced level II strategy”, he told me. He proceeded to explain further. 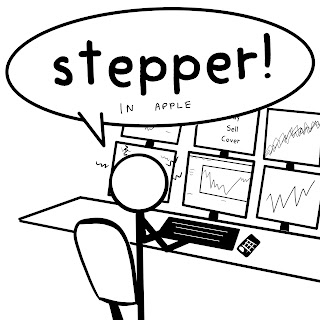 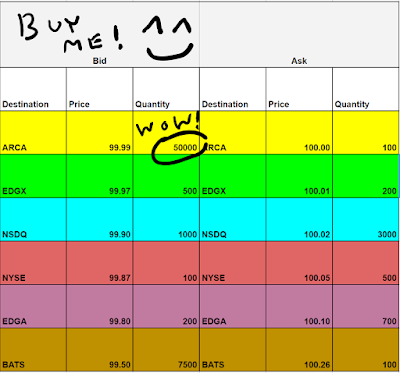 This is supposed to be the “large buyer” or “whale”. That’s the guy you front run with your small piker buy order. It’s first level logic — a buyer with a lot of shares to buy must send the stock price up, right? You scoop up shares in front of it and see where he takes you. The stepper then “steps up” through the price in order to jockey for fills, rewarding any and all scalpers for their parasitic trading.

Traders at Lemmings Capital were instructed to look at liquid S&P 500 large caps for these large orders and then loudly call out “STEPPER” upon spotting one, so others can jump on, ride the wave, and get paid their two to five pennies a share. This was called teamwork, they were told. They’d be each other’s eyes and ears. So everyone else can eat and pay their rent. Don’t be silent, be noble and selfless. 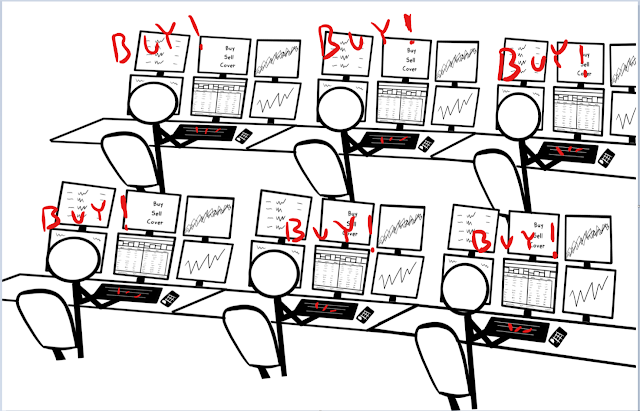 These pikers were just getting in front of large orders with size and trying to make pennies, with their exit plan being to hit the big order when it started getting taken rapidly. It was pure, mindless order flow scalping in an environment where manual order flow scalping had basically been left for dead by the rise of HFT.
9/10 times, you would either lose a few pennies as the order failed to the move stock before being taken out, or make a few more pennies if you were fast and able to take advantage of the microscopic reaction. The gross profit or loss would barely make a dent. Traders were encouraged to trade max size to squeeze the most out of a tiny move. It’s the small trading fees that would add up over time. Needless to say, Lemmings Capital did not have a high margin business plan.
That other 1 out of 10 times… well, you got fucked. 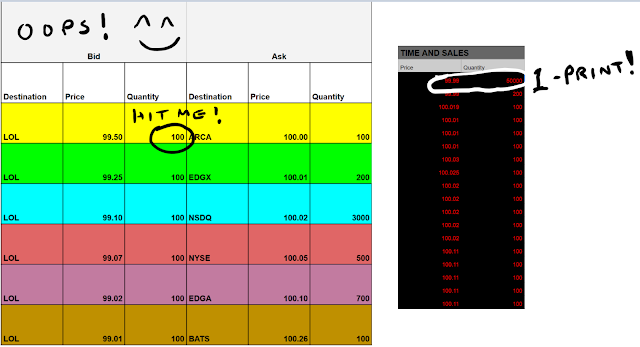 The HFT algo would either yank the bid quickly and hit the remaining bids underneath or a seller would take out the bid in one shot, what Billy told me was called “one-printing”. Then the rest of the bid side would thin out quickly. This would happen before anyone could react, trigger all the tight stop losses, and traders step on each other to panic out, exacerbating the severity of move by just a few more ticks for the next one out. Bob and Ivan taught their traders to be “be disciplined and always use a stop loss”, so they always got out, no matter what. 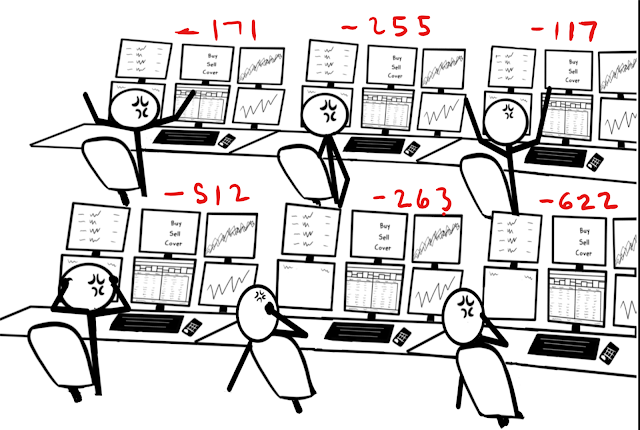 A few minutes later, the stock would trade right back up to the original price where they had gotten in.

Lemmings Capital was another burn and churn firm profiting off the trading commissions rather than teach an edge and make money through a profit share. The firm required small deposits from new traders so they weren’t really taking any risk in the first place. None of the poor souls had any clue what their (lack of) edge was.
Slowly but surely, every trader blew up their accounts, one algo-driven shakedown at a time.

Once your loss exceeded your deposit, Ivan would let you know you were being cut off. Then, I don’t know, maybe you put your head down and start to cry because you failed.

Bob would take you out in the hallway, put a hand on your sullen shoulder–like an empathetic veteran manager consoling a pitcher who had just surrendered a crooked inning–and give you the good ol’ pick-me-up speech. 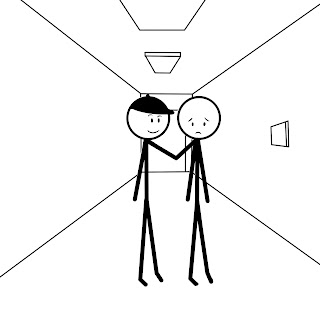 “Brother, I’ve seen the progress you made, you are so close to making that breakthrough. This happens to every trader the first time around. You remind me of myself when I first started trading, that’s the kind of special talent you have. You’re selling yourself short if you quit now. Give trading another chance, I really believe you’re one of the few who will make it.”
Translation: Make another deposit with us.

Ivan and Bob spent more time conducting interviews than they did actually trading on their own desk. According to them, everyone was a special trading talent.
I asked Billy if he made any money at all since he started. Not overall but just one profitable month, and if not even that, one profitable week?
“No, but I feel I’m close. It takes at least year to be profitable they said.”
I think he left a month later to take the CFA or something like that.

[Redacted] Gouged Me With $58,820 in Excess “Routing Fees” and Everything You Need To Know