August 25, 2015 Pete
I have to write about today… have to get something off my chest.

I remember the first month of live trading at my prop firm. We (myself plus 11 others) were all trainees pikering around with a few hundred shares, risking no more than $150 for the entire day. We spent our morning prep sessions going over stocks gapping up/down on news. Nobody really considered trading market indices like SPY, QQQ, VXX, or anything like that.

The market, two and a half years removed from the dead lows of early 2009, had spent most of the summer in a frustrating, non-volatile grind for most of the summer.  Traders were laboring for 10-cent scalps just to put food on the table and pay the rent. Some of the older guys were talking about leaving for another job or for grad school.
Then shit hit the fan. There was some bullshit happening in Europe. America had a debt ceiling crisis. Momentum came back into the market and fun times were upon us. 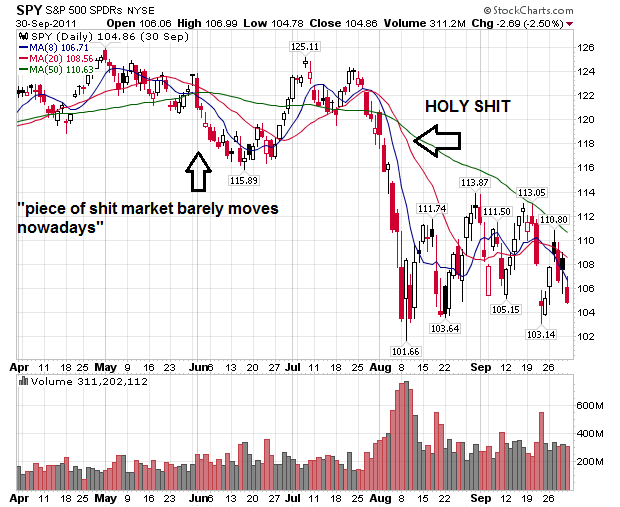 I remember one of my managers buying the SPY’s for a bounce and erupting with this weird, almost-like-a-tantrum, super-intense call-out to the market.
I also remember another fellow trainee who would keep calling out useless alerts while the market got taken to the slaughterhouse.
You know that guy in your local trading chatroom that has nothing useful to provide beyond ticker spam like “ABC hod” or “XYZ lod”–as if there’s ever any actionable information to be made from observing new highs and lows? Yeah, this was him.
Let’s call him Clockwork, for reasons that will become more apparent later*.
*he’s also an avid DotA player and I think he’d like that
It turns out Clockwork was the only trainee trading the SPY. He made $600 trading the SPY on a 200 share maximum his first day, which impressed everyone other than me because 1) I thought I was the shit and 2) I thought trading the market had no real edge otherwise we’d all be futures traders making bajillions pushing around the E-Mini’s.
When we were moved from the trainee section to be re-seated with the junior/senior traders, Clockwork was assigned to sit to my direct left.
He asked a lot of annoying questions.
He copied nearly everything I did and then just did it faster.
He had the most irritating trading style if you were in the same play. Tell him about a stock and he would just jump into it without thought, sell 100% into a short-term top then buy it all back on the pullback while you took all the heat on the trade and made less. Sometimes he would accidentally short by trying to sell long and even make money on that too.
He would take the biggest piker trades (low-margin, commission-heavy trades) and squeeze a dime out of a nickel. Then he’d get others into the same stock (not to front run, but because he didn’t know any better) and crowd the trade. When the market makers ran the stops, he’d get out fastest while everyone else usually ate the slippage.
But Clockwork had consistency down quickly. One reason is because his execution was nearly flawless. Not only was he the fastest in terms of pure reflex, but he didn’t seem to suffer from any mental lapses, like from greed (to take a profit) or stubbornness (to take a small loss). He would get out when it was time to get out. It created a habit of steady-hands trading. If anything, his problem was the reluctance to stay in and take (normal, expected) drawdown, even if profit was locked in. He didn’t make big money but he closed profitable nearly every day–like clock work.
“I just try not to lose money.” — that’s how Clockwork would explain how he’s so consistent. He’s said that to me and other traders so many times, he might as well trademark it.
I sat next to Clockwork for the rest of the time I was at the firm–almost 3 years as a tandem*. We were the only two trainees from that class, out of a dozen, that “made it” as professional traders.
*Clockwork also sat next to me during my day of reckoning, getting run over by the same long position on FNMA. He also got stuck but he didn’t trade as large as I had. He rallied from down roughly $50,000 to break-even. 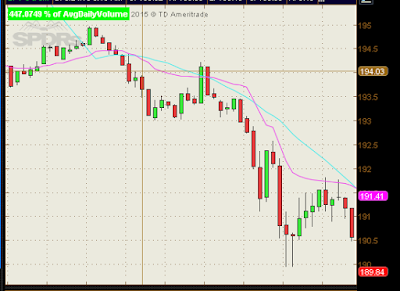 Oh shit, the SPY is down a ton already…
I over-slept my alarm by almost an hour. I didn’t bother to prepare over the weekend even though the market just had the first significant trend day in several months. I’ve been trading with an on/off switch for almost a good half year now. I don’t have goals anymore. I don’t push or challenge myself to trade bigger or learn new plays. I just try to make something (“something is better than nothing”, I sheepishly tell myself) and then leave without stress. That little voice inside whispering “you’re wasting your potential”? Eh, I’ll just drown him out by watching porn or browsing Reddit.
I consider myself a novice when it comes to market plays–the type of trading setups, be it indices or a basket of high-beta market stocks, that depend on unusual market conditions. My income is usually from niche areas in the market like trash stocks, growth IPOs, and biotech. Needless to say, I didn’t have a lot of confidence in my ability to take money from these big market movements. What was I going to buy? Or would I short VXX? Where would I buy it? What’s the most efficient and safe way to scale in? What’s my thesis? What’s my expectation? I wonder if it could have a huge panic on the open? I wasn’t really sure. I barely thought about it. Coffee wasn’t hitting the spot yet. I wasn’t ready at all. I cut my size down to almost nothing.
I shorted 200 shares of UVXY around 70, covered somewhere between 5-20 points too early, and made a profit. Nothing crazy–the type of money I make on a daily basis on most profitable trades. Not trying to be a hero or anything, but just finding effortless money and taking what I could get.
Well… the market bounced 10 points. That doesn’t happen every day. I wonder what Clockwork is up to?
I sent him a gchat. We talk almost every trading day. 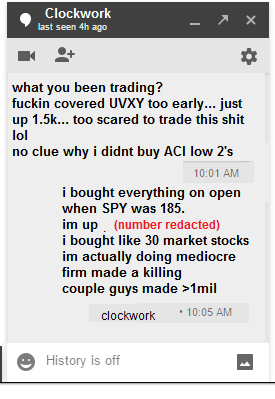 I looked at the number–what he just told me he was up in the first 30 minutes of trading was already more than I ever made on my personal best day. I was stunned. I kept staring at it. I didn’t know what to think.
After a short pause to comprehend what just happened, my inner monologue gathered itself to speak. My face started to wince. My toes curled and my hands balled into fists.
IT WAS RIGHT FUCKING THERE YOU IDIOT! A HUGE FUCKING TRADE! YOU CAN GO YEARS WITHOUT THAT TYPE OF PRICE ACTION ON THE SPY. WHAT THE FUCK IS WRONG WITH YOU, THIS IS YOUR JOB!
It had hit me: I just blew a monster opportunity.
This is the type of day to make your entire week/month/year/life*. And I went into it half-assed like any other day.
*if you are a certain type of trader. I am well-aware how easy it is to also lose everything if you don’t know what you’re doing or if you have overnight portfolio risk or whatever… that perspective doesn’t matter to me.
The guilt and regret sank in. Hard.
Was it worth staying up til’ 2am last night?
Was it worth it dicking around on the internet instead of paying attention?
Was it worth it to nap and watch TV all weekend?
All these unproductive lifestyle choices you’ve made the past 6 months, was it WORTH IT?
Why did he have to tell me how much everyone made? Doesn’t he know it crushes my self-esteem? I never want to look at what other traders make. It bothers me way too much. All you twats on Twitter who respond to PnL screenshots and say it’s inspiring… fuck you guys! Do you all piss rainbows and unicorns too? Where do you get your goddamn positive attitude from? I look at that stuff and I just feel small and insecure. I feel so low that I contemplating quitting forever and then maybe live in some cheap asian country. You know that quote about how people hate seeing in others what they don’t see in themselves? It’s one of those bullshit pictures on Facebook that people post… it’s kinda true about me. That’s me when I see results I can’t reach. I hate myself. I hate how afraid and gutless I am.
Deep breath
OK, I’m calm now. Needless to say, it was a long 5 minutes inside my brain from 10:05 to 10:10. I was a little upset.
I grinded the rest of the day to make some money… a sum that would be 2nd best daily PnL for this month but still a paltry sum all things considering. Emotionally, it feels like a loss. Maybe the worst I have felt about trading since that day.
I guess a lot of this seems like petty hindsight and I should be better than that… especially after prefacing it by saying I’m not the best at market plays. But I know I can trade anything. I know panic when I see it. I know what happens after panic. I know that if I focus and that if I prepared myself emotionally to take on risk, I can do so much better. I just need to be involved and then confidence will build afterwards. Force the issue if I have to, which goes against all conventional trading wisdom, but unusual action today warrants exceptions. Get involved, figure it out, you’re a big boy with near 6 years of experience and a real bankroll behind you. That’s the point. Am I making 1mil or even 100k today, no chance, but I’ll surprise myself. I guess the question now is whether I have the character to commit to doing that every day from this point forward.
But enough about my angst… because the only way I can cope with being such a selfish prick with a fragile ego (believe me, I hate that I have these thoughts too) is to be happy for my friends. After all, they have families to feed and rent to pay–after today, maybe some nice watches and cars to buy too.
Back to Clockwork.
This was the same guy who sat next to me for 3 years. The same guy who only wanted to scalp 10 cent trades and make $100. Same guy who frontran his stops and never gave any position the correct room because he hated losing money. Same guy who hated giving back profits so he never held winners for long.
4 years later in the present, he’s now a conviction trader buying into the market bottom and taking home an annual salary in a day.
I feel like the older brother who just got beat by the younger one in a game of pick-up hoops for the first time ever. Taken aback at first but now proud.
Here’s to you, my good friend. Your profits inspired me pissed me off to the point where I had to do some much needed reflection. Please tell me next time you’re laying out that kind of rope on a trade!
And to a few of my other good friends who posted career numbers today, if perchance you’re reading this, congratulations. Y’all earned it. Remember when none of us made real money and we were all somewhat cynical about a long-term career in trading? Well, shit’s real now.
Now I’m going to run myself (literally, like on a treadmill) into the ground and do some much needed homework. Oh look, the Shanghai Composite just gapped down 6% on open…

What’s it like to realize you’re good at something?