So I posted a poll on twitter a couple days ago to see how many traders use hotkeys vs. mouse or touchscreen. I was curious because I don’t see a lot of discussion on the mechanical side of trading.

How do you execute trades?

I’m a bit surprised that–given that my audience is mostly “active traders”–only 21% use hotkeys.

That means a whole lot of you are missing out on the experience of being a speed demon on the keys.

On Monday, I was excited to see one of my swing positions gap up pre-market. I owned the call options. It was a carefully thought out, methodically entered technical trade from the prior week. I had been patient. I waited for my targets to sell rather than just blindly taking profits into strength. I kept a decent chunk to let it run. The trade was paying me off a fat multiple of my initial risk.

My buddy Clockwork took the same trade and I thought he sold way too much on the initial breakout from the trading range. But that’s his choice. So going into this pre-market gap up, he was probably a bit too light on his position.

But then in less than a minute, his PnL catches up to mine on the symbol. 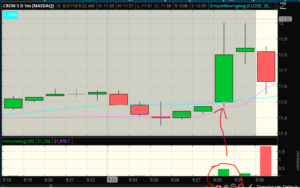 I don’t think a mouse clicker could have done what he did.  And certainly not a mobile trader. In theory, if they were absolutely prepared to react to that specific scenario in advance, maybe they could have. But being “absolutely prepared” in this scenario would entail actually having set up hotkeys to be faster, in the first place.  I get the sense that most mouse clickers just don’t care about being fast. They don’t care about scalping. They are content to look at a chart, make one entry, set a stop, and maybe enter a couple profit taking limit orders and making a living off that. That’s fine. I guess this blog post is give perspective to those who don’t trade like this.

Clockwork is a natural scalper but he doesn’t even make most of his money scalping anymore. The ability just gives him the opportunity to snatch the free money off these special situations.

The best traders at my firm–and I’m only talking about guys who I personally know and saw trade nearly every single day–are really fast. They process data fast. And while they all started off as scalpers, they can do everything now. Long/short. Options. Market plays. Micro cap low floats. Crypto. Gray-box trades. News trading. Scalping. Day trades. Swing trades. Long-term positions. They might trade up to 20 positions a day. One guy runs a hedge fund now. They can trade the patient money and the hot money.

Can you do that with just point and click?

I can’t think of anyone who stepped in from the other end of the spectrum–trying to be a relaxed big picture position trader and only using their mouse to make trades–being able to add scalps and hot money trades to their arsenal. Not saying they have to do it–hey, look at Warren Buffett right? he doesn’t need to do any of this shit to make his money. Just saying I haven’t seen it. Fast can go slow, but maybe not the other way around.

That being said, there is a residual effect to being trained as a “fast trader”. You might just get these annoying bad habits that are difficult to shed later. I can tell you first hand.

Advantages
So there you go. You want to be a fast, stare-til-your-eyes-bleed mother fucker trading with 17 monitors and a $200 custom keyboard, go for it. There are pros and there are cons. Personally, I just accept that this is part of my DNA at this point and I can only to try mitigate certain things. You can also just be your regular low stress position trader but use hotkeys and maybe save yourself the spread/slippage. It adds up over a long career. Either way, happy trading.