September 10, 2016 Pete
It’s been a year since my last blog post.
This is the cycle I’ve been going through:
“I should write another post. I have so many ideas!” –> Sit down to write… –> Go face to face with the toughest obstacle for any writer: lack of writing flow —> give up
I decided to write a little bit about my trading year so far… something easy instead of getting stuck in trying to craft any bigger message
Random points and events made in bullet form, in no relevant order:
1) It’s been a solid year. I’m 97% towards meeting my PnL goal (a number in my head that I had in January that I’d consider a “successful year”). If I continue on the same trajectory, I should double the profits I made in 2015. I’m not even sure how I got to this point…. certainly not by design or extraordinary effort.
2) I started the year with zero confidence. I had stopped trading in in the middle of November until the end of the 2015 (my longest break in trading ever). I had an explosive start to November followed by giving back  half the profits in a short time period (my worst drawdown period of the year) and suddenly I just felt I couldn’t do it anymore. I had reached my limits in disgust, guilt, self-pity, anguish– whatever negative emotion a trader could feel. I just wanted out.
3) I had no real plan with my free time. There wasn’t any training montage of a man beaten down dramatically getting up and declaring he will succeed–no prolonged period of setting goals, reviewing trading rules, reading more than ever, re-strategizing, and getting back in the game. I just did whatever I felt like. Sometimes that meant an entire day of watching TV, taking long naps, and eating fast food. Then repeating that day. I spent time with family. I’d work on my golf game. I did some online dating. I met a girl and fell in love. I had enough money to just do nothing for as long as I wanted.
4) December 2015 — I opened my mailbox and saw a letter from the IRS. This can’t be good. 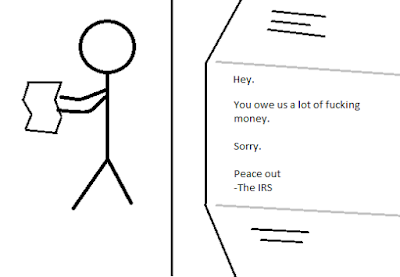 Long story short, this was all because of postage error I made when sending my extension request in April.

Well shit, now I have to trade…

5) At the start of the year, I traded like a massive piker. My goal was simply to show up–and showing up means DON’T LOSE MONEY, because if you lose money–you stupid fucking idiot–you’re gonna feel bad and you hate feeling bad so you stop showing up!
Just show up, don’t lose, and at the end of the day, you’ll be surprised…
Confidence and size picked up from there. Last year’s up-and-down emotional experience started to pay off in terms of cueing me into what not to do. I didn’t tilt trade as much. I protected myself from myself. If that meant shutting everything off (something I once abhorred as a weaksauce mental midget thing to do), that’s what I would do.
6) Major changes in 2016: I went cold turkey on adderall. That cranked up BANG BANG LET’S GO feeling at 9:30? Gone for good after 4 years. My energy level dipped dramatically but my trading got steadier. I became a slower, less reactive trader. More of an intraday trader than a scalper. I like the results so far. One downside? It sucks to write without the juice. Capturing that old writing flow has become much more difficult.
7) Another change: I started treating my trading as a business. This was stuff I always intended to get around to but kept procrastinating on.
8) I still have days where I feel like an irresponsible adolescent who wakes up in his PJ’s and presses buttons rather than a thoughtful, calculated, business-like professional trader. It’s that easy for me… to wake up and just make $1000 in 30 minutes, then enjoy the rest of my life. Thinking about horizons beyond can add a lot of anguish and disappointment. Why didn’t I make more? Why don’t I make more? Why do I lack the iron-will of other traders to just commit and do MORE? Will I ever fulfil my potential?

9) I trade with an on/off switch. I don’t bring it every single day, probably not even most days. I’ll make “enough” and call it a day. I’ll have days where I completely intend to mail it in but something special draws my attention and I fire all my bullets and make a killing. The conscious thought of pushing myself is usually absent (there’s a burden of responsibility that comes attached with these thoughts that I cannot handle) but sometimes it happens organically. I don’t even know anymore.

10) Some thoughts on social media… I think there’s a lot of great ideas and a lot to learn from other traders. I think it’s great to refine a trader’s ability to gauge sentiment and feel out the “trading herd”. But it can be a toxic mix when emotions like FOMO and jealousy get involved. I hate any kind of cheerleading on my feed, even when it’s coming from good traders who I personally like.
11) February 2016: I got another letter from the IRS. I sent them a letter asking for penalty abatement and they responded. I only had to pay a tiny fraction of the original amount. THANK GOD.
12) My favorite trade of the year: shorting CNR on a 200% price spike (due to ticker confusion on  Morgan Stanley upgrade of the Canadian CNR, a high priced railroad stock) when there was already an agreement that the stock would go private at $1.10. Why didn’t I put all my buying power into that one?
13) I’ve had to do a lot of reflection on who I am at this point. I remember sitting in class in my final year of college, after I had committed to moving to New York. I was bored out of my mind and day dreaming about the future.
Peter To.
Living in the financial capital of the world.
Young gun in his 20s. Real hot shot.
Hedge fund manager.
Nice tailored suits.
Runs 10 miles every day.
Works 80 hours a week.
Millionaire.
No, fuck that shit… billionaire!
Then I’ll buy the Dodgers from that piece of shit Frank McCourt and we’ll win the next 10 World Series titles with a gigantic payroll (note: someone else has executed that plan and it hasn’t quite worked out that way)
All these grandiose visions. I thought I was better than everyone else around me because I had fire and ambition. Nobody would outwork me!
I could’ve been yet another trader on instagram posting all-text memes about hard work and hustle and photos of my bomb-ass house and ferrari, under the guise of “motivating” others.
Needless to say I’m not that person anymore… maybe I never was? I’m not sure what motivates me anymore. Finding that fuel has been elusive. I can’t fool myself by posturing like I did before in my early 20’s.
14) That being said, I live a charmed life. There’s literally nothing bad in my life other than my penchant for self-inflicted negativity. I got a good thing going.
15) But if I can just get out of my own way, I’d make so much money. I mean, it’s stupid that I don’t try harder!
16) Ah fuck, stop it already.