A message to all the non-daytraders and skeptics

So last night, I discovered a huge spike in pageviews for my post about losing a shit-ton of money (the post above, which I changed the publish date in order to keep at the top of the page). The post was getting 100’s of views from the usual expected sources, like Twitter, Facebook, Stocktwits, mostly from traders within my community such as InvestorsUnderground, or people that I know personally. Then all of sudden, it was getting 1000’s of pageviews at a time — now over 40,000 in the last 24 hours. Holy shit.

I found out this was because someone re-posted it on Hacker News. Pretty exciting to see my humble little blog that had less than 1k pageviews last month reach an unexpected audience! I wrote the post for an audience of daytraders who could relate to what I was going through, but I never considered how I would be read by non-daytraders.
I then checked the actual thread and read through a lot of skepticism and negative feedback, both regarding my risk/money management (totally deserved regarding this particular trade, although misunderstood) and my use of technical analysis. Needless to say, a lot of people, based off one story that I haven’t yet finished, now think I’m just another halfwit gamble-my-savings-away day trader.*
*On some days, I feel the same way about myself.
Here is a sample of the comments:

You sound like the people I’ve seen on gambling forums postings about their unbeatable roulette system that they’ve “really won with in the long term”.

when you do understand probability and backtest these strategies, they are known not to work in the large. Stat arb is what happens when you actually do statistics, and these days it’s got only a slim to nil advantage.

Reading this sort of stuff from manual prop traders makes me laugh. It sounds so amateur hour. How in the world can manual traders ever compete against a short-term stat arb or HFT strategy? It just sounds like pure luck that any of them will make money.

We call it picking up pennies off a train track.

Yeah, I alo made a fortune in the market except for the money I lost.

Do you think technical analysis works? Look at the mountains, try drawing resistance lines, my god, you are able to predict when the mountain ridges are going to break through right past 9000! Are you Jesus?

Don’t forget the magical term ‘support’. Or ‘Fibonacci levels’. Or ‘resistance zones’. If I see another blog post by the brokerage firm I’m with about freaking ‘supports’ I’m going to hurl. Technical analysis puts everything from astrology through religion on to homeopathy to shame in its bullshittery.

For what it’s worth, I don’t take any of the criticism or snarkiness personally at all. I welcome it. I always felt like I could be someone who could help bridge the intellectual gap between the momentum/technical trading school and the probability/statistics-oriented quant school, due to my background as an online poker player who relied on observing betting patterns and probability-based methods rather than tells or “gut feel”. I spent my formulative online years reading through a gambling forum where concepts like variance and expected value became casual-speak in any given thread, even if the subject was sports, politics, or food. Some of my favorite non-fiction books include Fooled by Randomness, The Black Swan, Fortune’s Formula, The Quants, and When Genius Failed. I’m far from an expert on probability or behavioral finance, but I like to think I have a decent novice’s understanding of both.
From what I’ve observed, TA skeptics are often sharp-minded, quanty/hyper-logical types who understand probability concepts very well. They scoff at the idea of drawing lines on a chart to predict the future movement of an entity of enormous complexity like the financial markets. I totally get that, it can seem too stupid to believe. Your beliefs are further confirmed when, if you surf the web about TA, you often stumble upon wannabe traders who use charts like this: 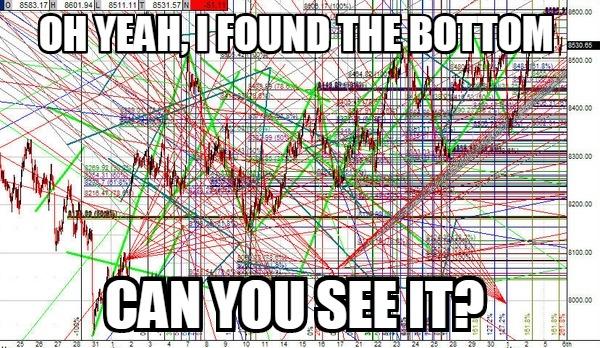 I was once a skeptic of technical analysis too, for all the same reasons listed in that thread:
I’m not the type of guy who can just blindly say “Well it’s working, why question it?”* I’ve had to wrestle with these thoughts in real time and work intellectually to put these concerns to rest, as another part of me just wanted to draw trendlines and press the BUY key. Additionally, I’ve also read a lot from well-known technicians (here’s one such guy, who I highly recommend. here’s another for good measure. I think this is a decent quick read too) who went through a similar process in order to intellectually accept the validity of technical analysis.
*It’s my observation that the best traders never really explain the edge well beyond “because it’s simple supply and demand” because it comes so naturally to them. They’ll just eventually ignore you because “you don’t get it” and then keep making money.
I’m guessing 95% of these new influx of readers, while probably super bright, don’t trade on a regular basis outside of the occasional portfolio adjustment. And if they do trade, it may likely be through different methodology than what I employ — which is standard price-action/sentiment based trading, straight out of the Jesse Livermore school, with some kinks thrown in to adjust for the modern era of electronic trading and an awareness (but not detailed research) of news and fundamentals to adjust for the idiosyncrasies of trading individual stocks.
Anyway, that is my effort to tell you where I am coming from. You have no idea how much I’ve read up on financial history, probability, and behavioral finance. You have no idea the number of profitable traders (whose track records I get to see or witness in real time) I’ve spoken to whom use a variety or combination of different methodologies. I don’t think I’m naive or delusional. So with that said, here are a few responses to some common generalized arguments:
1) “You’re just picking pennies off a train track”.
This is more about my risk management and the risk profile of my trading strategy, then about technical analysis. I get that when you don’t see all my results nor do you have complete understanding of the trade in question and you only read the (unfinished) story, you only see “this trader made X every day and apparently, he then lost 100X in one day”. Thus you immediately think I’m one of those suckers who got owned by an unforeseen fat-tail risk — that my trading was a miniaturized version of what LTCM was doing or something like that. Well, it’s apples to oranges because I had far more control over my situation, but failed to exercise that control to keep the loss manageable. There is a huge difference between losing $ because you were undisciplined or emotionally compromised versus losing $ because you were blind to risk. You’ll just have to read to the end to understand.
2) “These strategies have no edge when backtested.”
I’ll preface by saying I only have a limited experience in actually backtesting a strategy but here’s why I suspect there has been a huge gap between the supposed “backtesting edge” and the actual results of real-time traders with a large sample of trades.
Remember that technical analysis isn’t just charts, it is ALL market-generated information (price and volume or deriving from price/volume), which HFTs and quants are using as inputs as well.
3) “The only profitable traders are the ones who haven’t blown up yet. (Insert textbook example of XXXX people flipping a coin heads up and one guy winning it X straight times thinking he’s the man)
Take any profitable technical daytrader’s long-term track record and run a stat analysis on it. Trades are not binary outcomes like coinflips. If you think someone with a consistent 70% win rate with 3:2 profit factor or 50% win rate and 3:1 profit factor on over 5000 trades is just the benefactor of survivorship bias, then you must be the type of guy who thinks a 10-sigma event happened after flipping 100 straight heads, rather than concluding it was just a rigged coin. How is this trader generating similar outcomes across so many different stocks? How is he producing similar numbers as markets keep changing (bull, bear, volatile, non-volatile, rangebound, trending)? How are his numbers still consistent even when you zoom into random smaller samples? You’re probably still stuck thinking in casino land rather than understanding the true relationship between probability and markets.
Also, read Warren Buffett’s rebuttal to the coinflip BS about “luck”. The more observations of traders with a similar strategy and approach making money, the more it reduces the chances that outcomes are only due to pure luck.
Back to writing
I could probably add more to it but since my post was such an unexpected hit, I don’t want to leave my audience hanging because I’m too busy debating everyone. I want to work on finishing it. I haven’t actually explained why I personally think technical analysis works but I don’t think that matters. I just want to encourage a bit more open-mindedness. Believe what you want.
I hope some of you wait until I finish the post before you jump to conclusions about what I am doing, how much edge there is behind it, how risky it is, and especially what the true mistake behind my loss is. Feel free to post any comments (please stay constructive) but I will only address them after I’m done writing.