October 17, 2014 Pete
Background
These are my early trading days (2010-2011) while I was still in college. More than half of my trading volume was on the OTC/Pink-sheets — home to all the best pump and dumps and empty shell companies. I mostly made money by finding pumps and shorting them on Interactive Brokers (IB). IB has a first-come/first-serve mechanism for locates — the first traders to actually take a short position would use up those locates. Sometimes you had to wake up earlier to “lock up” the locates before the other short-sellers. By routinely waking up and watching the level II of an active otc stock at 8am (actually it was 5am pacific time but I’m going to refer to EST for all trading time purposes), I observed a strange little phenomenon that didn’t quite make sense.
OTC Trading
If you know how the OTC market works, you can skip this. 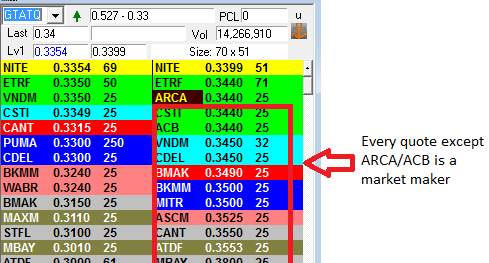 When you start trading otc’s, the first concept you must understand is that unlike stock quotes on the NYSE or NASDAQ, OTC market maker quotes do not adhere to Reg-NMS rules. That means you do not automatically fill at the quoted price when you route to a market maker. The market maker has to fill you. If something is trading 1.00x.1.01 and you are you placing an order to sell at 1.00 bid, you don’t get filled immediately.
That is a big difference. Liquidity is a lot more opaque. It can be very chaotic in liquidity rushes (squeezes or panics). If you’re late to sell in a panic, you will see your order unfilled as the bid drops and drops and drops.
There is one major exception, and that’s if you route your orders through ARCA, the only ECN on the otc markets. If you route a market order or marketable limit order to ARCA, you “get it right away”, like in the normal market.
The ARCA Low Offer
8am is when ARCA opens up for trading on the OTC. Before that, you can’t route ARCA.
Whenever I watched a highly traded mailer stock like LEXG, UTOG, JAMN, I noticed there was often a print at 8am that would mark the stock down. It could be down 5, 10, and even as much 20-25%.
And what struck me as very unusual was that you would see ARCA crossing multiple market makers (not available for routing before the market open at 9:30) who were posting prices much closer to the prior closing price on the bid. So if NITE posts at best bid at 1.50, ARCA would low-offer somewhere stupid like 1.30. Keep in mind that otc’s don’t trade pre-market and news rarely matters, especially on these highly controlled mailer stocks.
Bid                                                                       Ask

Then the offer would get taken quickly, nothing or very little would happen for the next 80 minutes and the stock would open up normally, often within 2-3% of the prior close, or even move to gap up significantly.
What is the point of doing this? Seems like if you wanted to sell the stock, you could just wait for the open and fill at a much better price. Why trade when there is no volume? It made no sense. Why is ARCA just giving his money away?
My theories:
1) Amateur short sellers sending in market orders to short asap on ARCA through Interactive Brokers
2) Market makers who are net short the stock trying to mark down it down as an intimidation tactic
3) Market makers who are net long and trying to mark it up using this a meta-tactic to suck in early sellers and either shake out the stock or later create a short squeeze

Ultimately, it didn’t matter to me what the real underlying answer was. I had no reason to believe I was the sucker for buying. The other guy was the sucker for selling!
The Flip
So I did what made most sense to me — I paid ARCA for as much as I wanted at these discount prices and then at the 9:30 open, I’d sell it immediately to the market makers. Boom, free money!
This worked EVERY SINGLE TIME… (except one time*…)
Here are a few more samples.
A few random thoughts:
The One Time*
UTOG on March 22nd, 2011.
I lost about 8 grand in total. It is still the largest realized loss I’ve had on a single play or within a single day on my personal account.
I actually have it on video.
I puked it. I did not have the experience to realize I was exiting in the most inefficient manner possible in a very illiquid panic. At the very least, I could have minimized losses by working the order a bit rather than just trying to dump it regardless of price and volume. I was not as sophisticated a trader as I thought I was… just a fool as prone to acting out of fear as any other rube.
I remember shutting down my platform after that and driving to Panera Bread to get some coffee and food. While sitting there in the booth trying to get some studying done, I drifted into a state of delirium where I honestly thought it was just a bad dream that I lost $8,000 in 10 minutes. Then I snapped out of it, realizing I was still living in reality — “oh NO… that did actually just happen today… how am I going to go on with my life?!”
You know what’s crazy? UTOG went green later on and traded to new highs. 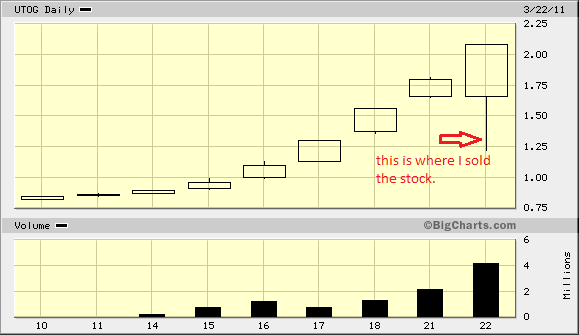 Present Day
If this trade still occurred regularly, I wouldn’t post this. The strategy has effectively been in retirement. The mailer/pump landscape is on life support. The SEC has been hounding these plays for the past 12 months, even halting stocks after 8am and intraday. The best promoters are gone, and so is the order flow. It was a gift in the days where I didn’t really know how to trade. Now it’s just a memory of the days yonder when you could still make big money on pumps.

The Day I Lost a Sh*t-ton of Money, Part II

The Day I Lost a Sh*t-ton of Money DVD Special Feature: The Narrowly Averted Crash on AAMRQ