The “Should Have” Trade That I Will Regret Forever

You ever think about the one that got away from you?

It could be anything.

An amazing business opportunity.
The partnership stake in a unicorn startup, that you sold for pennies on the dollar to fund a steady career in advertising.
An amazing partner.
The perfect college sweetheart you broke up with to “find yourself” on a year long trip to Europe.
A grand achievement at the highest level.
The final hurdle to win a gold medal but you tripped over, seeing your dreams slip away in your short and finite athletic prime.

So for us traders, there was that trade that you missed. And you will experience severe regret as you see an explosive moves away from the entry level that you considered and decided to passed on, you IDIOT. 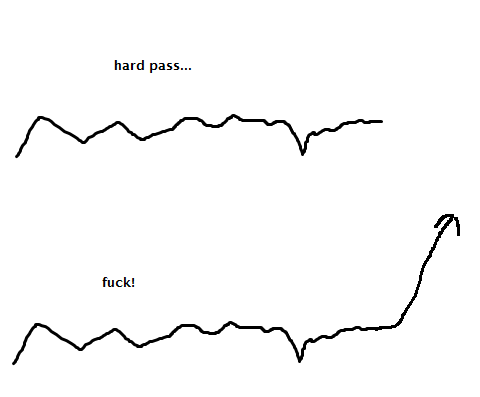 But here’s the good news: the longer you trade (and the better you become as a trader), the longer the list grows of all your missed trades. Your trading memory will start to eat up a lot of free space. These missed trades will become a big jumble of charts in your head and few, if any, will stand out. It won’t sting so much as time passes.

Here’s another thought as well: anything can be a “legendary trade” if you put enough capital or leverage behind it. Every week there are options going up 500-1000%. Every week there’s some dumb low float trash going up 100% or more. Every quarter, there’s an explosive breakout from earnings. Someone out there must have had the risk appetite and conviction (or just dumb luck) to have made money on one of these moves. It doesn’t feel like a rare event if it keeps occurring so often.

Nonetheless, I do think we all have some missed opportunities and regrets that stand out, even after all these years.

But Peter, I have no regrets. Life is a learning opportunity and all my mistakes have contributed to who I am today and thus I have no true regrets–yeah shut up. I hate you people and your positive, resilient attitudes. I have regrets and I want to whine about it, like a normal person, okay?

There is one missed trade that will stay with me for a long time. It made the headlines last year:

Ethereum flash crashes to $0.10 on GDAX

So for the unfamiliar, here’s a short recap of what happened:
1. Someone entered a fat-finger “multi-million dollar market sell” order
2. There was not enough liquidity on the market depth to absorb this move
3. Stop loss orders and margin call liquidations caused another chain reaction of sell orders, exacerbating liquidity issues
4. The price cleared all the bids on the order book all the way down to $0.10.

And I was fortunate to be at my computer to watch it unravel in real time. Behold…

I stared at it.

Shit. That was my moment!

I started entering in orders to try to take advantage of any subsequent mini-crashes on what was, at the moment, a super thin bid. I did catch some decent scalps but within an hour, the market started to stabilize. I knew that the moment for an all time stroke of genius had come and gone in the blink of an eye.

Coinbase would later rule for all trades to stand and would reimburse all losses caused by the flash crash. They would also remove the margin trading feature, which has since yet to return.

I had a lot more than $350 in my GDAX account and I was mostly a scalper during the time so I held a lot of cash rather than crypto. I don’t know if it would have been a trade I could retire on but it would’ve been pretty damn cool to blog about it after the fact.

Look, I know what you’re thinking. This is the type of trade where every Joe Schmo is thinking after the fact, “oh man, why didn’t I think of that?” Well, the reason this specific trade resonates with me the most is because once upon a time…

That was me buying at $20 on Bitfinex, $80 below the actual trading price. I saved that picture.

Oh my God, did I really get printed there!? THAT’S FREE MONEY BABY!

It was April 12th 2013 and the bitcoin bubble had burst. (Where have you heard that one before?) 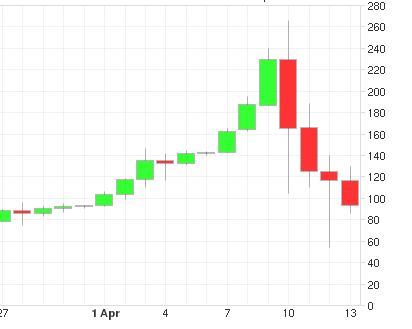 Bitcoin is trading around $55-120, depending on what exchange you looked at, after a massive crash from $260. The biggest exchange, Mt. Gox, had been halted for several days, passing on the process of price discovery onto fragmented, inefficient and thinly traded exchanges.

My primary exchange was bitfinex since they had leverage and shorting. They were not that popular yet though so it was trading with low volume and large spreads. 10-20% bid-ask spreads were not unusual at the time.  Typically, that’s a sign for an active trader to stay away. But I didn’t care for conventional wisdom. I didn’t care for safety. To my startling observation, other traders were frequently paying through the spread with market orders and spraying way past the best bid and best ask. It was total amateur hour.

So, there I am with my small cash deposit and nothing to execute trades rapidly except my own hands, stepping in to make markets of this thing people called a “crypto currency”–the existence of which I didn’t even fully comprehend quite yet. I would place multiple orders on both sides of the book and pray that the market didn’t rip against me too much and margin call my ass.

I had no method, no pricing model, no process. It was all guessing–just try to turn over my money as many times as possible and catch spreads. 80x90, I’ll step in at 83 since I need to buy, sure. If the market moved away from me, I’d scale into more of my net position (could be long or short) and raise the other side to try to reduce my exposure. I figured market making is just about reducing directional risk over time. Don’t let an adverse move eat you up.

Part of my routine was having to constantly refresh the Bitfinex trading log (time and sales) to see how trades printed because many of the real time chart API’s were temporarily down. That’s what trading crypto was like back in 2013–primitive, unreliable, broken.

After what might’ve been my 893th refresh of the night, I saw the magic happen. That was me sitting at $20, getting printed for 38.9 bitcoins. BOOM.

I sold them all near $100 within minutes and realized about $3000 in the profits on that one round-trip alone.

All in all, I made about $5000 in a few hours of trading, which was incredible at the time because at that time, $5000 was a good month in stock trading for me. This wasn’t a great time for me personally. I had thought about quitting this whole trading thing and moving back to California and it was killing me inside. This night alone lifted me out of depression.

For the next months, if I ever had spare capital, I made it a purposeful habit to always have low bids entered into bitcoin… because you never know when she might say YES.

Seeds of the Idea

Unfortunately the magic print never happened again. I made decent money with more conventional trading on the run to $1200 and then I stopped trading crypto altogether in 2014. It was a bear market and I had lost interest. Then I came back to crypto in May 2017, a little late but not too late. That’s probably a post for another time.

But man. Think about it!

It’s not just hindsight. The seeds of knowledge and experience were there for me to place an extremely low “just in case” bid and capitalize on that opportunity. Imagine reveling in your genius of being able to put it all together and just do something so simple, something that takes zero work and zero risk… and then the impossible happens and you take a small fortune out of it. And I couldn’t do it! For whatever reason, I just stopped doing what I used to do. I stopped believing it was possible. But in a young, disorganized, chaotic, inefficient market–anything is possible.

This is why I will always take the chance on new frontiers of market opportunity. You just never know how you can make money. It isn’t always a matter of needing a bias that something will go up meaningfully higher or meaningfully lower. There might be these unknown inefficiencies that you can brainlessly exploit with close to no risk at all. That’s also why I took the risk on the overseas broker that shall not be named, for those of you who were fortunate enough to read my last blog post (now deleted).

A lot of traders love that feeling of being right.

They made the right call.
They told everyone on twitter that that piece of shit stock was going to 0 and it did.
They screamed at the top of their lungs on CNBC that this stock would go to the moon and it did.
I was a bull and I beat those idiot bears. I was a bear and I beat those stupid bulls.
I was a contrarian and told the crowd to go suck it and they did.

We all want to be George Soros, breaking the Bank of England on a generational macro call. Hey I won’t lie, I like that feeling too. I just think it’s overrated. I like another feeling a lot of better.

“That was too easy. I feel like a bank robber”. — this is something I say to my trader friends when the trade is a little too easy.

I like that feeling after a trade where I feel I just got away with a heist for a $100 million diamond and no one was the wiser. I’m taking off my ski mask and high fiving my entire crew for a job well done. It was THAT EASY. I didn’t need to pontificate upon the wisdom of the crowd or prognosticate the future. I didn’t have to be Soros or Livermore. I didn’t need to lay out the risk. I didn’t need to worry about some bullshit squeeze or shakeout or stop out. I just took the sack of money off the ground and ran as fast as I could. I love that feeling more than any other feeling. There should be a German word for it.

That should have been me as I hurried to transfer all my stolen ten cent ethereum off GDax and sell it on another exchange. Should have. Now it’s just a missed trade that I’m blogging about like a loser.

I don’t regret not buying bitcoin at $30.

I don’t regret not buying ethereum at $10.