Sometimes when I’m indulging my ego and I want to feel good about myself, I like to think of how I would want to be described in a book or on an introduction on TV. 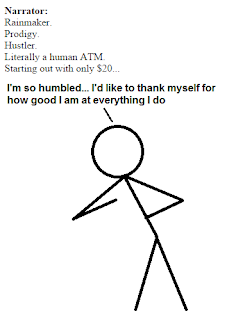 That’s what I do. I crop together specific life moments to create a narrative that shines on the best aspects of my life, and then I craft an entire identity around it. It validates me. It overcompensates for the other not-so-cool aspects of my life, like the social anxiety, the total abyss of a personal life, and the dulling pangs of inadequacy. I stop paying attention to that stuff because I’m money baby.
The story I like to tell at bars to make myself look cool and special is the story of how I learned how to make money–and that story starts with $20 dollars.*

*BTW you know what’s great about that number? It’s just so small and always will be. One day I might get lucky in a random angel investment or venture capital deal and bink a 50-bagger, and move my net worth past 8 or even 9 figures–the real, “I’m important and I matter” kind of wealth. Maybe lightning strikes twice and I become a billionaire. Regardless, as long as I don’t go broke and keep my personal equity growth continuous, I still get to say I started with only twenty fucking dollars.

I’m 14 and starting high school. I like to watch sports and play video games. I don’t have any friends. I’m roughly average at everything I do. I’m not particularly interesting.
Despite constantly being told “your education is the most important thing in the world!” while growing up, I had stopped caring about good grades and academic achievements. In 2nd grade, I once beamed with pride after my teacher referred to me as “Speedy Gonzalez” after I was the first to finish the multiplication tables classwork. In 7th grade, I received a D in algebra and my dad wanted to disown me. I’m not really sure what happened to derail me off that track. In an alternate universe, maybe everything hums along from K to 12 and I’d have been an archetypal high-achieving prep student who ends up being a doctor or lawyer. I righted the ship enough to avoid pissing off my parents but deep down, I thought being too attached to high grades was a sucker’s game.
But it’s not like I was good at the stuff that did capture most of my time and attention–take gaming for instance. I spent years of my life playing Starcraft… and I would still get my ass kicked by a simple zergling rush. The zergling rush (aka the ‘4pool rush’) is the Starcraft equivalent of the 4-move checkmate–if you seriously can’t figure it out, then quit early because the game is just not for you.
You know those “millennials are too entitled and always think they’re special” articles that run on the New York Times or Vox or HuffPo every month or so? Yeah, that was me around that age. I saw peers score higher on tests, achieve more in sports and extracurricular activities, receive all kinds of awards and praise, and develop rich, fulfilling social lives while I sat on my ass and did nothing–and I still thought I was better than everyone else.
I just needed to be good at something–something that proves just how special I am. Then I would show ’em all and everyone would be begging to be my best friend.

It was the summer of 2003 and I was staying up until 2am flipping around TV channels to cure my boredom. Something new caught my interest on ESPN2. 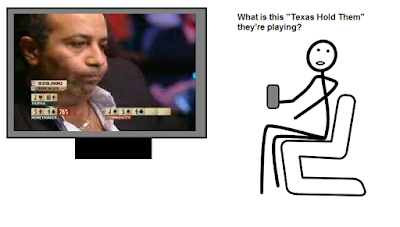 They show poker on ESPN now? This is… kinda cool.
How come I can see the hands they’re playing on the screen?
What does “check” mean?
There’s poker on the internet now?
Is Moneymaker his actual birth name?
Why do I have a hunch that I could be good  at this game? 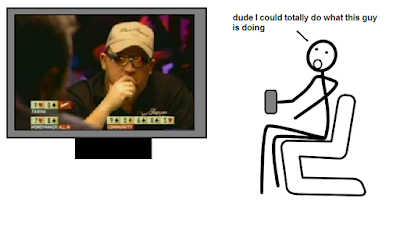 I had all kinds of questions. I had to know more. Poker became a deep obsession. I had to play as much as possible. I had to study it and hone my game. I had to win.
I’d read through almost all the book in the Barnes and Nobles gambling section. Super System, The Theory of Poker, Caro’s Book of Tells, Phil Hellmuth and Ken Warren’s shitty books… eventually I sorted through all the noise and focused only on the TwoPlusTwo books–the highest quality publications.*
*not as true now as it was in 2004 due to massive growth in the poker education biz 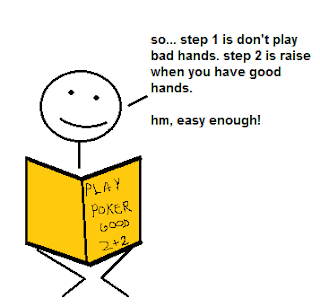 I started off playing online play money tables. It was addicting at first (and helpful for internalizing the rules and getting “up to speed”) but my enthusiasm tapered off quickly when I realized none of the complex, high level post-flop play I had relentlessly studied was applicable to play money tournaments–a table style best described as a pack of degenerate jackals spam clicking the “all-in” button.
Full Tilt Poker had these massive freeroll tournaments (no entry fees) that paid out peanuts to the top-3 finishers. I think first place was $10. I must have played hundreds of them. My pinnacle achievement was finishing 3rd place to win a grand total of THREE WHOLE DOLLARS! 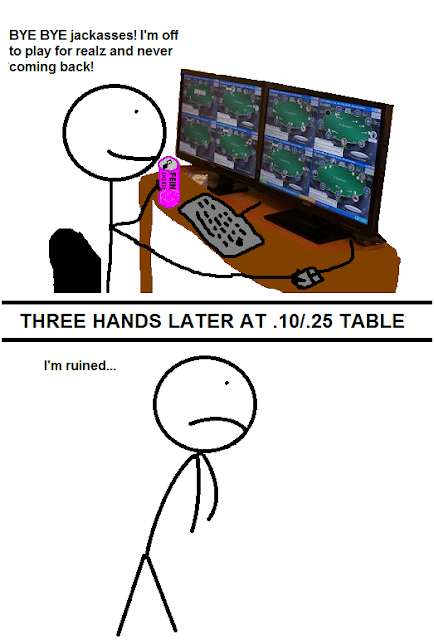 I also played in home games organized by my older sister’s friends.

It was here when I started observing how the every-man thinks while playing the game. My sister was an honors student enrolled in majority AP classes and applying for top-tier universities, and naturally, most of her friends and classmates were in the same boat–smart, capable, overachieving, and at least decent at math. Higher level poker concepts were easily within their grasp. Yet of maybe the 15-20 different guys from that circle, I remember only a couple that made any attempt to study the game’s more advanced concepts. Maybe a few more had cursory knowledge of super basic stuff like hand probabilities (four-flushes, straight draws, etc) and pot odds through TV segments or cheat sheets, but that was it. The first step towards vastly improving one’s game was to simply fold total garbage hands pre-flop, which is kinda just common sense if you think about it, and they wouldn’t even do that.

I found it interesting how many players were willing to put their money at stake without even the slightest clue (interest?) that they had an edge in the game. Did they think they knew enough already? Were they not aware of this greater universe of knowledge out there?  Did they care?

This went on for about a year or so, but I got tired of taking $5 buy-in’s from broke high school students and playing “all-in or fold” lottery poker on those time-consuming Full-Tilt freerolls. I had something to prove and I wanted to play for keeps.
I just needed a bankroll.

Being only 15, I was ineligible to make online deposits under my name. I guess I’ll just ask my parents–they see how much I love playing poker every day, I’m hopeful they’ll think it’s a good idea.

I approached my dad. Here’s how that went: 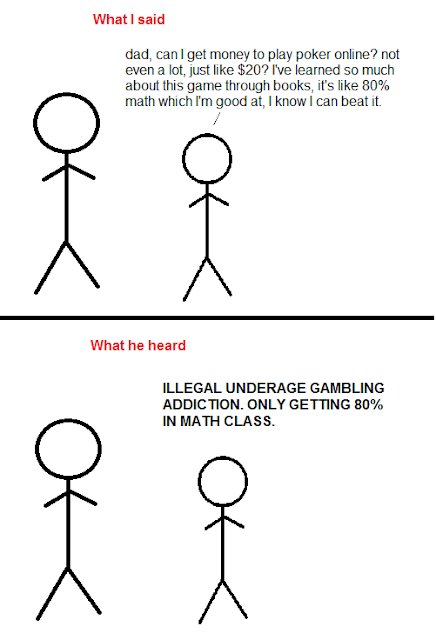 His response was “No”. Welp, I tried.

I needed another plan–and I didn’t quite know what that plan was going to be, but my sixth sense for hidden opportunities and exploiting loopholes took over and slowly pieced it together.

Now I only had to find my guy on the other side to transfer the money. I didn’t know anyone but somebody out there had to be already exploiting this. There’s just no way I’m the first to think of all the possibilities. After several weeks perusing the sketchiest corners of online gambling forums and googling phrases like “underage poker deposit method” I found exactly what I was looking for:

The details were inside: “Will also transfer $20 in Pokerstars real money credit, along with hat“.

Bingo! That was my ticket in. I still had to ask my parents to deposit money on PayPal but that would be a much more innocent request than asking for a direct deposit to an online gambling site. I’ve bought baseball cards and Pokemon cards off E-Bay before too–I mean, that’s what you think of when E-Bay is mentioned, isn’t it? Collectible items. Weird tokens and souvenirs. Fan memorabilia. Haha, I’m just a geeky kid with geeky interests looking to buy some stuff, nothing to see here.
I asked my mom for $20 on PayPal to “buy some stuff on EBay”.. I was prepared to say “sports stuff”* if further interrogated, but I did not have to. She gave me $50, no questions asked.
*poker’s a sport, right?

Crossing both fingers that I wasn’t being scammed, I confirmed my $25 PayPal transfer. One time, please let this be real. I need this $20, it’s my destiny, otherwise I’ll be a loser forever! My transaction partner told me he sent his $20 and that I should receive it shortly.

5 minutes after, I started holding my breath. I kept checking my account balance.

Hm, okay, no big deal. I paced around. I ate some peanut butter. I sat back down and checked again.

What if he tricked me? No, he definitely tricked me. He’s laughing at me all the way to the bank with all his stupid scammer buddies. He’s probably the same asshole who scammed me with all those duped items in Diablo II. Do I call PayPal for a reimbursement? What if I they find out I’m doing something illegal? Will PayPal call the FBI on me? Am I old enough to be charged for a felony? Is it true what they say about what happens in the showers in federal penitentiary? Fuck, check again!

I sent one of those annoying panicky e-mails that accomplishes nothing except confirm to the recipient that you’re a panicky little loser who panics too much–it’s been 11 minutes, where’s my money? y u scam me? He promptly replied that Stars customer support has to approve every transaction. Well he wouldn’t even reply if he outright scammed me right? I took comfort in that.  My logic is sound. He is a good person. He clearly and obviously did not scam me.

On what was probably around the 274th click, another number replaced $0.00.

This is what you get when you act like assholes.