Starting From The Bottom

I had read about all these stories of college students making money on Party Poker and Stars–18-23 year old turning $100 deposits into $1000, $10,000, $100,000, and live WPT/WSOP appearances. Some would rise from micro-stakes all the way to the nosebleed stakes, from $5 pots to 5 figure pots. I didn’t see any reason why I couldn’t do the exact same thing. I had a mission in life now. Why study for a biology exam or make friends at school, when I could make money? Yeah, you do your homework, I’m going to make a few hundred bucks in an hour. It was more than a financial opportunity or a hobby, it became an identity–my path to subvert the traditional, expected route of accumulating good grades to get into a good college, then attending grad school and/or taking some boring job. I convinced myself I was so cool because I was playing a card game.

That $20 had a real meaning to it and perhaps became too important. It was everything. I had to make sure I never go broke. I had a plan to survive. 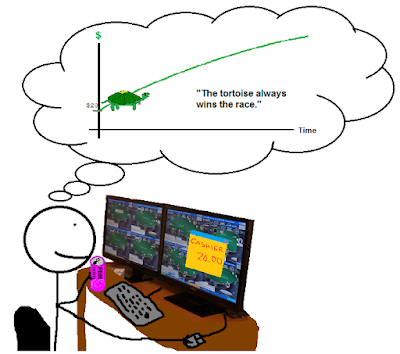 Fish in a Barrel

Even though I first learned and had primarily played no limit tournament style, I decided to play limit hold ’em to grow my bankroll instead. Why?

The players at these tables were trash. You might as well donate your money away if you’re calling 4-bets pre-flop with any hand. Regulars from higher stakes would routinely stop by and raise every single turn just to let off steam. $.05/.10 LHE was the absolute gutter of Pokerstars–who gives a fuck about nickels and dimes?
I didn’t even need any actual skill like hand reading or bluffing, I just had to be patient. I played rock tight–I’d commit money on only 12-15% of my hands (this excludes blinded hands where money is already committed) pre-flop. I memorized a cheat sheet for hand selection based on position and prior action (based on how many players in and how many bets to call). I thought this alone would be enough for a substantial edge.  The fish would drop their money on the ground and all I have to do is just wait there, with my aces and kings, and pick it up.
I opened a couple .05/.10 tables and committed myself to textbook, vanilla ABC poker. It worked right away.
Within my first week, I got my account up to $30. Not too shabby, I thought. At this rate, I’d move up to .25/.50 in no time. 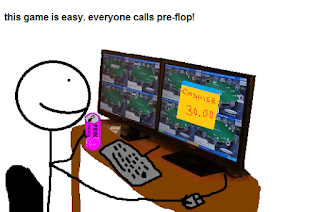 But after peaking around $40ish, things kinda slowed down. I wasn’t able to sustain the win rate I had during that first encouraging week. In fact, it seemed like I would end every day’s session as a slight loser. I was taking more than my fair share of bad beats and tough pots.
The fishies always catching their draw on the river.
My pocket aces and pocket kings getting cracked.
Losing capped pots where I had to cry-call my 2nd best hand down to showdown.
My account melted right back down to where I started, $20. That didn’t feel very good. That sense of “progress lost” ate at me. Hmm… this doesn’t feel as easy as it should be. 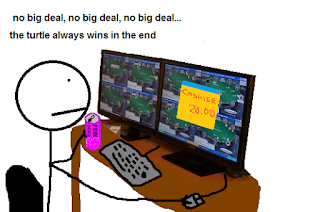 But hey, it’s poker. That’s the game!
This was expected. No big deal. A sophisticated, savvy, experienced online player understood how nasty short-term variance could get, and while I wasn’t exactly a grizzled veteran or anything, I had learned about the trials and travails of others who had been successful. Great players experienced weeks long or even months long downswings. They remained patient and fought through it.
I’m just running bad. Getting unlucky. When everyone calls pre-flop against your pocket aces, your expected value actually goes up even if your win probability for that particular hand goes down. In the long run, I still had an edge as long as I play with the probabilities on my side. I’m still smarter than all of these idiots. I’ll beat this game. My turn to have the good run is just around the corner.
This was the happy face I was trying to put on.

…and now making me his punk 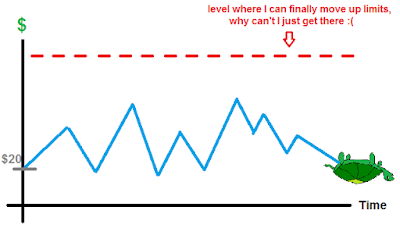 …more of the same. It’s as if my account had a magnet to always revert back to $20.
Variance toyed with me. Is it normal to be *this* unlucky? Am I special? My attitude towards the game started to change. My beliefs started to change. I was not having fun. Each bad beat would have a cumulative impact on eroding my patience and cold rationality. No more happy face for me.  On each showdown with a non-nut hand, I would be waiting for the other shoe to drop. Let’s see who sucked out on me with a 2-outer this time… 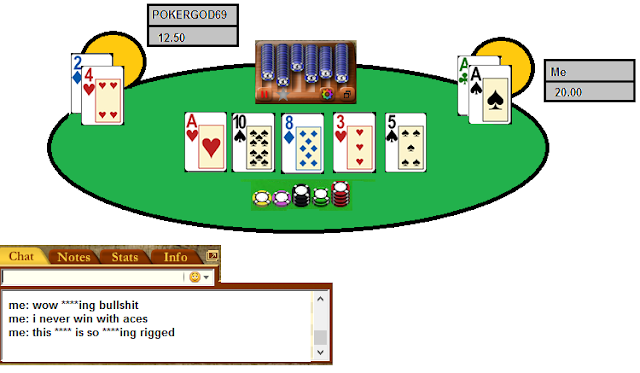 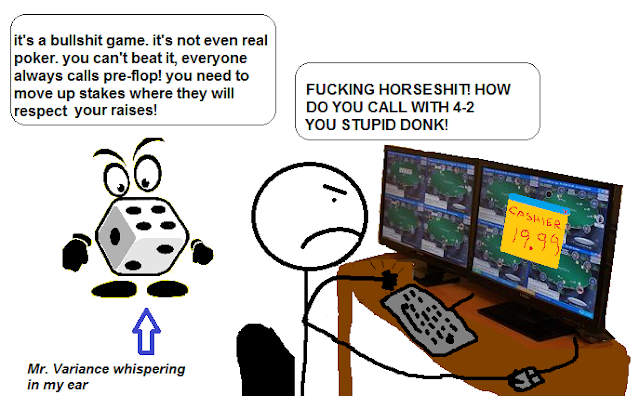 Instead of thinking situationally and mathematically for each given hand, I would draw hasty conclusions based on my emotions–cynical, fear-driven emotions influenced by a string of tough beats or a recent downswing. Of course I’m beat. I knew my hand wouldn’t hold up. 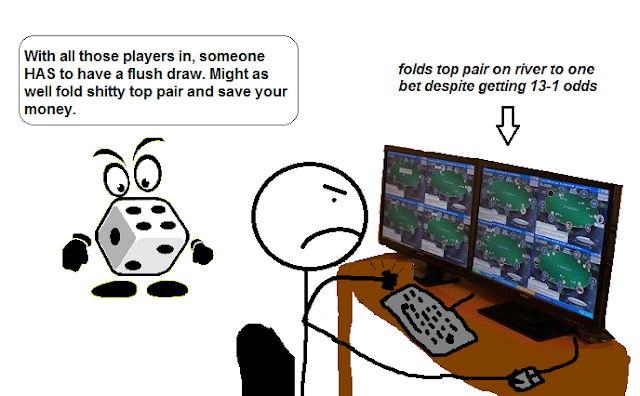 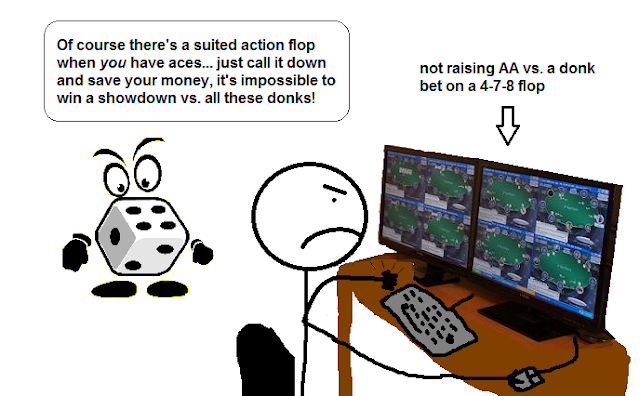 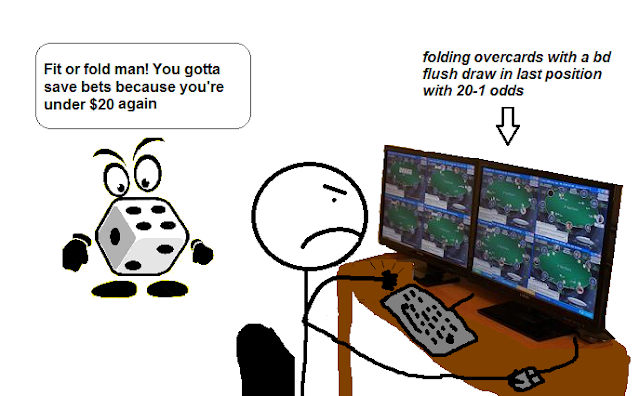 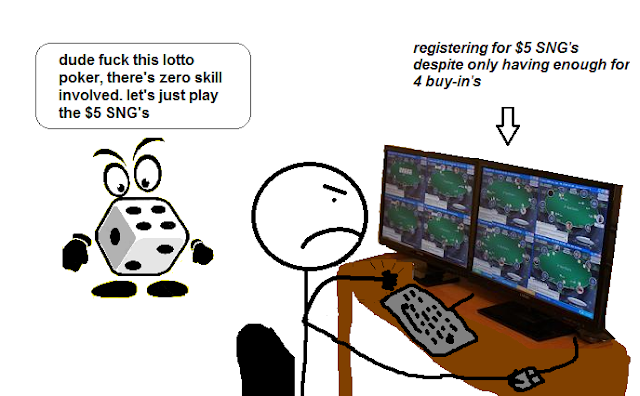 I had enough.
It was time to play real poker where I could bet more than one unit, take players out of the pots, and protect my made hands.