Maybe limit just wasn’t my game, or so I reasoned. I had a cynical outlook–it was all just a fucking crapshoot. Playing solid tight-aggressive poker pre-flop wasn’t sufficient enough for anything more than a small edge. There was zero nuance or creativity in post-flop play* because nobody paid attention–they just played their hand and smashed the call button if they had a non-0% chance of winning. I didn’t want to be patient anymore. It had been a month of going nowhere. It wasn’t validating my talent or intelligence.
*I would later learn how wrong I was to think that… which I will detail in the next part. 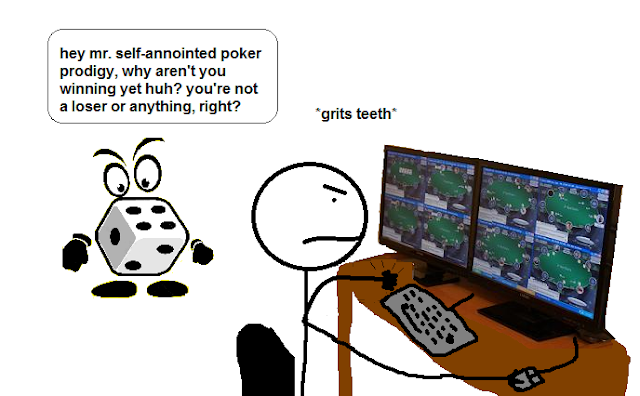 Back to my Roots

I re-directed my focus to the $5 Sit’N’Go tournaments (SNG’s). It felt right.

It’s the style of play most similar to home games, where I first honed my game.
It’s the game I had most practice in on the play money tables.
I can finally play creatively and make moves.
I can protect my hands and not worry about 6 different players sucking out on the river.
My tournament game didn’t have a lot of sophistication but I understood certain principles unique to tournament-style poker. I had the right fundamental habits.
Mini-rambling on poker strategy, feel free to skip
Now, all of this is super basic to any experienced tournament player, but at the absolute lowest stakes, most players don’t have a clue and commit ultra simple mistakes that give up a huge chunk of value each hand. This is not the same “mistake” as misreading someone’s hand on a big decision in a huge pot like whoops, he did have the flush, guess I lose. It takes talent, skill, and experience to develop hand-reading ability–and even the best will get it wrong (or make the correct decision and still be “wrong”) because it’s inevitable when acting upon imperfect information. Navigating these decisions is what separates decent from good, and good from great. But there are decisions in poker, especially online poker where there’s no element of reading physical tells, that are just axiomatic and require zero talent to make. An absurd example would be folding pocket aces pre-flop in a cash game–that is clearly always the wrong decision and it’s self-evident if your objective is to make money. A more practical example would be a late-stage tournament raise/fold situation, where calling is never correct. For example, take a heads up tournament situation where both stacks are shallow (low multiple of big blinds, pot-commitment is 1-2 bets away), the button raises, and the big blind holds a low pocket pair. It’s never correct to call instead of re-raising (even folding would make more sense than calling) because there are just about zero advantages to seeing a flop, whereas a re-raise has 2 primary advantages — 1) committing when you’re more certain you have the edge (as opposed to having to make a tougher decision to bet out of position when 3 high overcards flop) and 2) your opponent might fold and give up his equity in a coinflip situation ( assuming he likely has 2 overcards). There’s a clear cut right and wrong decision, situational context doesn’t matter, and there’s no real debate.
Anyway, enough rambling. My point is, I didn’t do stupid shit while my opponents often would. So I had that going for me.

My account was pretty much right back at $20. I had enough for 4 buy-in’s. I waited until school finished to play so I could devote all my attention towards building my account for the weekend.
I placed in my first one (either 2nd or 3rd). That was a good sign.
I played for the entire day–just one table at a time, so I could maintain scrupulous attention to every player’s betting action. Every edge counts. 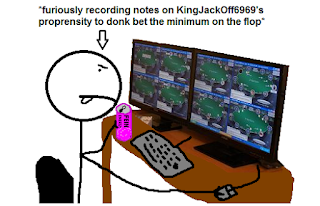 I finished slightly up that first day and felt encouraged.

And then Sunday came around.

And so did Mr. Variance. 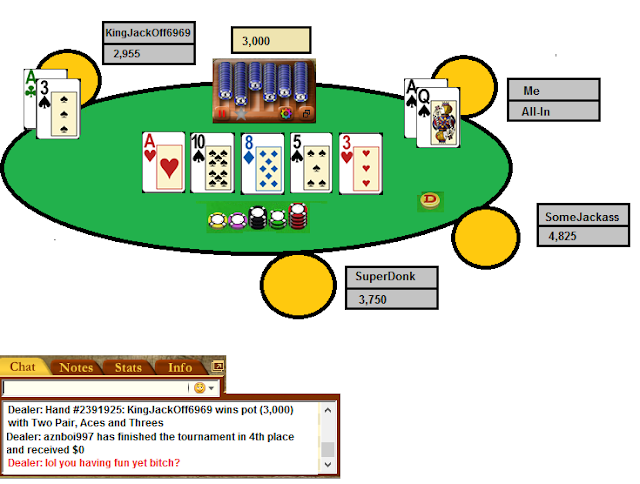 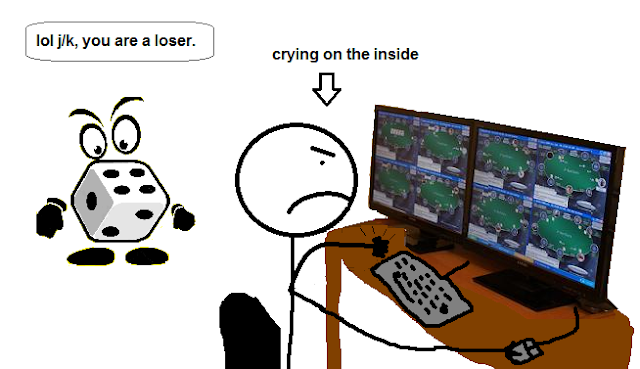 I kept bubbling out in 4th.

It was like I was playing a recording of the same SNG over and over and over again. Early on, I’d get some playable hands pre-flop that didn’t hit. By the middle stage when the blinds start to mean something, my stack would bleed away while I endure several rounds without a pot. Then I get to the bubble and somehow, the other short stack improbably manages to survive multiple all-in’s. Then I’d have to flip for my entire stack and Pokerstars gives me the one-sided coin–heads they win, tails I lose.

I go through a string of SNG’s without finishing in the money, all the way down to my very last buy-in. My last chance to prove that I am worthy.
I busted out on that one too.
5 weeks and just like that, I burned through my initial deposit. I painfully checked the cashier to confirm.

I wish I could remember losing in dramatic fashion. And that because there was no justice in the world and because online poker is obviously fucking rigged, a miracle runner-runner royal flush sucked out against my straight flush and busted me out in 4th while having the exact equal amount of chips to the chip leader. That would be the story I’m telling to my kids, my grandkids, and any poor, unsuspecting stranger at a casino while I pontificate on the horrors of gambling and the abyss of total bullshit that was online poker.
But the reality was, it was just another tournament. 10 years later, in the present, while writing this story, I don’t remember anything about how I busted out. They were all the same tournament to me. I was just some punk kid trying to grind SNG’s with a shoestring bankroll and I went on a bad run.

Seeing that zero in my account… it was all I could think about. It was a mark of failure. 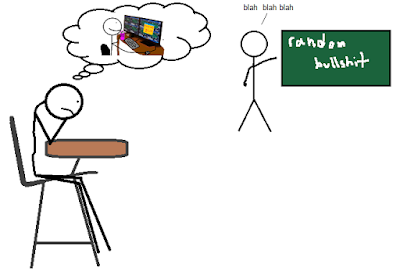 I still had the remaining $25 on PayPal. 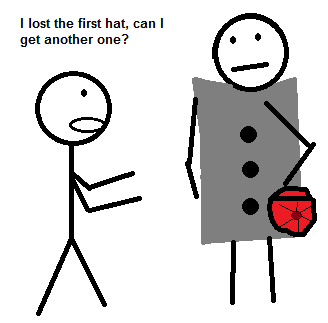 This is what you get when you act like assholes.